The ACA - exemptions from the mandate

The ACA itself provides for a number of exemptions from its otherwise general requirement (going into effect in 2014) that citizens purchase health insurance. In addition, it authorizes the Department of Health and Human Services to approve additional exemptions.


Those who are covered under the VA, Tricare, Medicare, Medicaid etc. are regarded as in compliance and thus do not have to be concerned about the penalty or exemptions.

The exemptions cover:
What does this last requirement mean in practice? The Kaiser Foundation has an explanation accompanied by a graphic that needs a bit of interpretation. 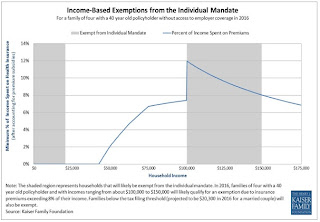 The Kaiser Foundation calculation is based on 2016 projections for a family of four, and the graphic depicts the amount that the family will pay for health insurance - with the assistance of the premium credit, in the middle of the chart.

From 0 to about $37,000, the family pays nothing for health insurance; they are instead eligible for Medicaid. From $37,000 to $100,000 (rough figures), an increasing percentage of income goes for premiums, but always under 8%.

At $100,000, the percentage suddenly goes up to 12% because the premium credit is no longer available. The projection for 2016 is that, without Federal assistance, the average cost of health insurance will be $12,000 per year for a family of four. (One could question that projection, given the fact that employer-provided group health insurance for a family is slightly higher than that figure at this time.) That is 12% of this family's income. From $100,000, the percentage goes down, and at $150,000, it meets the 8% limit on the declining slope. It is the group of citizens who are in that income range, those who make a good living but are not regarded as "rich", who will be exempt from the individual mandate.

The calculations could be done in the same fashion for other family groups. A single person hits the 400% mark (of Federal poverty level) at an income of $45,000, but his premium is much less because he is covering only himself.

Email ThisBlogThis!Share to TwitterShare to FacebookShare to Pinterest
Labels: ACA

From Bloomberg: The IRS is coming for your Venmo income.   The IRS is reported to have imposed a new requirement for Form 1099-K, on which a...